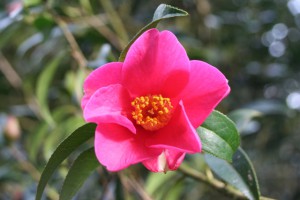 A dark form of the species C. saluenensis which was introduced by George Forrest, from Yunnan China, in 1918. Named for many a year here at Trewithen as C. saluenensis ‘Dark Form’ the name ‘Trewithen Red’ was first used in the 1973-1974 Southdown nurseries catalogue (now the world famous Burncoose nurseries)

First started to flower in December last year (2017) and she was looking looking stunning, against the red brick wall of the summer house, on my commute to work this morning.