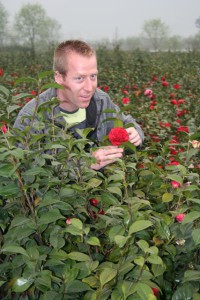 Gary Long is celebrating his tenth anniversary as Head Gardener at Trewithen Gardens, near Probus.

Having taken on the position in 2004, Gary had some big boots to fill, with the two previous Head Gardeners – Jack Skilton and Michael Taylor, who were in their positions for 60 and 40 years respectively – both receiving RHS Long Service medals. Gary has enjoyed putting his stamp on the gardens, which have most notably included applying for and being named in 2012 one of only 30 International Camellia Society Gardens of Excellence in the world.

“The highlights for me have to be my two trips to China, following in the footsteps of the famous plant hunter George Forrest, and accepting our Garden of Excellence award,” Gary said. “Seeing camellia and other plants growing in the wild was very inspiring and life changing experience. I’m hoping to go back in 2016 on another plant hunting expedition.”

The Garden of Excellence award is by no means the only accolade Trewithen has won, however. Under Gary’s care, the Gardens have been given various awards, including 33 prizes at the RHS National Rhododendron Show at Rosemoor in 2010, being named the first ever winners of the Lamellen Cup for Best Magnolia and winning the Tremeer Cup for Best Rhododendron at the RHS National Early Camellia Show at Rosemoor in 2013.

The Gardens have seen something of a transformation whilst Gary has been Head Gardener. In 2004, Dr. Owen Johnson, Registrar of the Tree Register, officially named 20 Trewithen trees “Champion Trees”, allowing Gary to create a Champion Tree Trail, which visitors can follow around the Gardens. More recently there have been introductions of wildlife into the Gardens as well, with the red squirrel hide being officially opened by Prince Charles in 2012, followed by a bird hide in 2013.

Gary has also spent a significant amount of time pruning laurel hedges, originally planted to protect new trees that now tower over the Gardens. The removal of these hedges has allowed more light and air into the Gardens, a job that was started by owner Michael Galsworthy’s grandfather in the early 1900s.

“My lasting legacy to the Gardens has been the plant database which I set up when I took over as Head Gardener 10 years ago,” said Gary. “It’s an ongoing project, which I hope will outlast me here, and it has allowed us to catalogue all the plants so we know exactly what we’ve got.”

The database has also helped enable two plants to be officially named – the Rhododendron ‘Trewithen Purple’ that was given its RHS certificate in 2011, and the Camellia saluenensis ‘Trewithen Red’ that followed later that year.

Gary’s work in the Garden does not stop there – future plans include the restoration of  “Eagle Ponds”, the creation of an “Himalayan Valley” in what is currently the Water Garden, and a “Pinetum”, or a collection of conifers, planted in climatic zones.

“Gary has been an asset to Trewithen,” said the owner, Michael Galsworthy. “He’s made the Gardens what they are today, and his hard work over the past 10 years will be enjoyed for generations to come.”