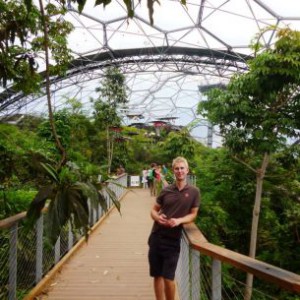 Another volunteer gardener from Trewithen, near Probus, has earned a prestigious position at one of the finest country estates in the South east.

Adam Carveth, who worked at the internationally acclaimed garden between 2008 and 2009, has just been offered the job of Head Gardener at Knebworth House in Hertfordshire.

Six years ago Adam was working in the fruit and vegetables section at Marks & Spencer when he saw an article in the West Briton about the need for volunteer gardeners at Trewithen.

He said: “I’ve always been interested in horticulture and I was inspired by the article. I met Gary Long, Trewithen’s Head Gardener, and was so impressed by his knowledge and passion I wanted to be mentored by him.”

For the next ten months Adam worked with Gary who, recognising talent, encouraged him to study for Royal Horticultural Society exams, guiding him to success.

Adam eventually began his own gardening business and wrote a fortnightly horticultural column for the West Briton, although he never lost touch with Gary or his roots at Trewithen.

In 2014 Adam joined the National Trust as a garden supervisor at Chastleton House, Oxfordshire. Within months he was asked to oversee a portfolio of National Trust gardens in Surrey and then successfully applied for the job at Knebworth a few weeks ago.

“It’s all happened so quickly,” he said. “I’ve relied on Gary for advice at every step and he’s always keen to listen and help. Gary was the first person I told when I was offered the position at Knebworth.”

Gary said: “I’m so pleased for Adam, although his success comes as no surprise. He clearly had ambition and drive and always wanted to further his career in the business. I am really chuffed that someone who started quite humbly here has risen to the top of the horticultural tree.”

Adam is the fourth Trewithen Garden volunteer in the last few of years who has gone on to achieve outstanding success in the horticultural field. Just a few months ago Nicola Johnson was accepted onto the Professional Gardeners Guild traineeship. Before her, Scarlett English won a three-year apprenticeship at the Royal Botanical Gardens, Kew. Inez Williams, who volunteered at Trewithen whilst completing A levels at Truro College, was so inspired by her experience she chose to study landscape design at university as an undergraduate – for which she received a first class degree – and now at post graduate level.

Anyone interested in becoming a Trewithen volunteer should contact Gary Long on 01726 883647 or 07743 470945.  No previous horticultural knowledge is required – just keenness and willingness to learn.