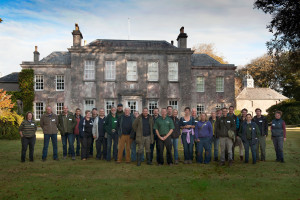 Tony Kirkham, Head of the Arboretum at Kew Gardens, was the guest of honour and key speaker at a head gardeners’ workshop held at Trewithen Gardens.

Around 28 senior gardeners from the county’s most prestigious estates attended the event which was supported by Cornwall Garden Society. It began with an informal ‘walk and talk’ tour of Trewithen, led by Head Gardener, Gary Long, ending on the famous south lawn – home of several champion trees which are those that have been officially measured by the UK’s tree register and declared either the tallest of their type or as having the widest diameter.

“It was when we arrived at the lawn that Tony came into his own. He’s brilliant,” said Gary. “His depth of knowledge is unbelievable and he got quite excited by our Stewartia sinensis – a champion tree which he said was the best he’d ever seen.”

Tony went on to share his knowledge, passion and enthusiasm with his fellow gardeners. He concentrated a large part of his discussions on a plant hunter named Ernest Wilson who is remembered for introducing around 2000 Asian plant species to the UK, sixty of which take his name and several flourish at Trewithen.

The morning finished with a pasty lunch and Tony was given a cutting of Stewartia sinensis – affectionately known as the elephant’s leg tree – to take back to Kew Gardens.

“The day just couldn’t have gone better,” said Gary. “We’re very lucky in Cornwall, no other county has such a united group of senior gardeners who share knowledge and best practice.”