Will a young Cornishman become the youngest person to row the Atlantic? 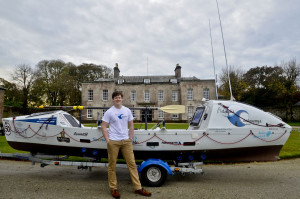 With the backing of HRH Prince Charles, Duke of Cornwall, a young Cornishman is about to row 3,000 miles across the Atlantic to raise £150,000 for the Brain Research Trust.

If Jack Galsworthy, a 21-year-old student from Trewithen, Probus, and his rowing partner, Freddie Wright, from Stroud, complete their journey, they will be the youngest pair ever to row the Atlantic.

Weather permitting, Jack and Freddie will leave the Canary Island of La Gomera, on December 15 as part of the Talisker Whisky Atlantic Challenge under the team name, Atlantic Castaways. Their boat, Blue Steel, is an old hand having been rowed to victory in the competition last year. For Jack and Freddie, however, the race will be the first time either of them has rowed on open water. Once they leave the safety of the harbour they’ll be on their own, at the mercy of the elements, until they finish the race at Nelson’s Dockyard English Harbour, Antigua, hopefully in mid February.

Jack said: “More people climb Mount Everest every year or have ever been into space than have rowed the Atlantic! Hardly surprising as those who enter this race face 40 foot waves, howling winds, sharks, blisters, salt rashes, sunstroke and sleep deprivation as they row a constant shift of 2 hours on 2 hours off for between 45-95 days.”

Jack and Freddie have been preparing for this challenge for 18 months. They’ve completed extreme and sea survival courses, a first aid at sea qualification and passed Ocean Master theory and VHF radio exams. They’ve spent endless hours at the gym and rowing — they both compete for their respective university rowing teams – Jack for King’s College London and Freddie for Bristol.

One of the most challenging elements of the preparation has been putting on fat and muscle as competitors must expect to lose around 20% of their body weight during the race. Jack and Freddie have spent many hours creating daily ration bags, each of which has over 6,000 calories worth of food inside. They have enough for 70 days. To ensure they are prepared they have the support of a nutritionist and a psychological mentor who has worked with tennis champions, Andy Murray and Roger Federer. It was this team that won the challenge last year so their advice is based on first-hand experience.

However thorough their preparations though, there will still be dangers. If they do get into difficulties there will be race support boats no more than two days away and in the event of an emergency they will contact the coastguards at Pendennis Point, who will co-ordinate their rescue.

With the help of sponsors, Jack and Freddie have invested £90,000 in the challenge and put their university degrees on hold, but they believe it’s worth it to raise a record breaking sum for the Brain Research Trust. Both are intimately aware of the tragedy of brain disease. In August 2012, Jack’s brother-in-law suffered a serious brain injury after he fell from his bike during a triathlon. He was in a coma for two months and has not yet fully recovered. Jack’s bond with the charity is strengthened by having had a grandmother who died from a brain tumour and a close family friend who suffers from Alzheimer’s. Freddie, has also witnessed the effects of brain related illnesses. In 2012 his uncle died of a brain tumour and his grandfather suffers from dementia.

Jack said: “I suffer really badly from sea-sickness, it’s what I’m most afraid of during the challenge, but our personal experiences with brain related illness have put that small inconvenience into perspective and will act as our inspiration and motivation out on the Atlantic. We are determined to reach our target.”

It is possible to sponsor Jack and Freddie via www.justgiving.com/Atlantic-Castaways.